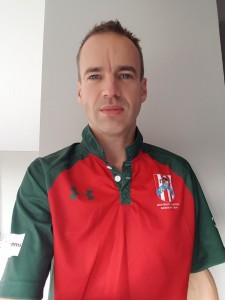 After a break of several years from ‘formal’ competition participation, Westbury O40’s is once again alive and kicking having entered the England Hockey Championships Masters tournament 2017/18.  Our plans are to include many of the ‘newer generation’ of Vets players, and ensure that we put out the best side possible for tournaments like this.

We will, however, ensure that any O40 who wishes to play Vet hockey can do through rotating our squad in friendly games and other ‘mini-tournaments’; we already have 3 of these scheduled across the year and aim to arrange more.  In true Westbury style, the hockey is the primary focus, but the social side will be an important part of how we run our team.

If you wish to be involved, please get in touch

A rag-tag eleven travelled to Worcester to play this re-arranged fixture in Tier 2 of the Vets O40’s England hockey competition. Having arrived in Malvern with 30 minutes to warm up, the match began at 12.45pm. The first half was dominated by Westbury with plenty of possession and many chances on a very bumpy pitch. A nice move 10 minutes into the game gave Psycho the opportunity to put Westbury ahead, which he took in some style. Worcester only looked threatening on the break and it was on one of these rare occasions that their most skilful player broke and finished nicely into the roof of the net. 1-1 at half time. The second half was much more even as a result of several Westbury mistakes, but also Worcesters growing confidence. But thankfully Westbury converted a 2nd goal after a neat run from Bomber and pass to Tufty who dived on the floor to finish and make the score 2-1. He shouldn’t be doing that at his age, but the Westbury team were delighted that he did. There was plenty of pressure but the Westbury defence were resolute and Murph made several excellent saves. A well taken short corner saw Westbury go 3-1 ahead (nice Psycho drag flick), and despite a relatively poor 2nd half performance, Westbury came away with the win. A beer and chip buttys (yum-yum pigs bum) were enjoyed at a local pub after the game with the oppo. Well done all !

Famous words from the most successful captain – Dave Bomber Harris – as he drafted me in to a cameo captaincy debut for the VETS. How hard could it be, I exclaimed? I nice trip to Guernsey or Bristol and West home, either way we’ll have a good old ding-dong and enjoy the jolly.

Well, we drew Isca HC and so they came to the Dingle, whilst Harris tucked into him first course and cocktails. We were optimistic/naïve (you vote here), after all they only won it last year so they probably aren’t that good J

We started well, for the first 38 seconds and then found the ball had nestled neatly in our goal – what happened there? Undeterred we continued to lose possession and get punished at will. After a short amount of time, that seemed an eternity, we entered half-time 6-0 down. Smurf did comment in the post match analysis that he did touch the 68mph drag-flick short corner from the ‘ex’ GB player, but in ‘Wayne-World’ style added a ‘NOT’ swiftly after….

Now, at this juncture, in our defence ISCA had only scored once from open play, which is pretty poor going for a team that won it last year and we’ll all stick to that story, whatever interrogation may ensue.

ISCA were/are pretty good, but we dusted ourselves down at half-time and put some plans in place e.g. let’s try and pass it 4 times in a row without them scoring…… and things started to take some shape.

Now, it would be lovely to say we rallied and surged to a comeback, but we didn’t quite manage that. We did manage to restrict them to only two more goals, short corners of course, and played some nice old hockey at times, to be fair. Evidence of this was an ISCA player saying; “you got yourselves together in the second half and made it hard for us”.

It was a tricky encounter, but we never dropped our heads and battled to the finish line and enjoyed a sausage or two at the Duck to take away some of the disappointment of a hefty ish defeat.

And, yes David we would have won with you…..

PS Their coach, yes they had a coach, happened to mention the 5 England VET internationals and their strengths in his post-match analysis……

PPPS Is that enough excuses, apart from mentioning Tony…..?